An estimated 70 million devices are expected to be connected to the Internet and exchange data by 2020. From the coffee machine to the doorbell to the pill box: Connected devices that talk to apps and online services have so far been part of the realm of visions of the future. Lorawan stands for “long range wide area network” and is a radio network with a wide range and small energy requirement. Although they can only transmit tiny amounts of data – images are already eliminated – Lora devices can work for miles and can do with a small battery for years. The chips are small like a two-franker, thus fit into everyday objects and are at the same time cheap – around ten francs. This makes them ideal for bringing devices to the grid at a reasonable price. Small sensors or switches could soon appear in all everyday areas, in flowerbeds as well as on letterboxes or bicycles.

The application of the Internet of Things must take into account many factors, such as network costs, battery life, data transfer rate (throughput), network coverage and type of use, it is clear NB-IoT and LoRa two technologies have different technical characteristics, wide coverage, low speed, low cost, low power consumption and other features that are suitable for applications with low power consumption in the Internet of Things, and they also actively expand their own ecosystems.

At communication distance, NB-IoT compared to other low-frequency wide-area propagation technology can achieve the link budget 20dB increase in open environment, signal coverage can be increased seven times. Among them, 20dB corresponds to the loss of the signal through the outer wall of the building. Coverage of NB-IoT in the indoor environment is relatively better, and the overall communication distance can reach 15km. LoRa can provide a maximum connection budget of 168dB. In general, the range of wireless distance is 1-2 km in the city and 20 km in the suburbs.

We have successfully iterated to Use LoRa devices and Radio Frequency Technology (LoRa Technology) into our smart bike locks that complement their licensed spectrum connectivity options for full network connectivity, even in remote areas and densely populated buildings. MOKOSmart is a pioneer in the field of the Internet of Things (IoT) and has led the application of NB-IoT, NFC, BLE and other IoT technologies. Omni is integrated in the products of wireless communication, artificially specialized intelligent, sensor technology, which is a national high-tech company, integrated the development of hardware, software and system solutions.

From a very different point of view, a growing number of tinkerers are approaching the subject, who would rather see a free, universally accessible Internet of Things. The idea of the Dutchman Wienke Giezeman has been kicked off. The Internet entrepreneur from Amsterdam has launched a foundation with the Things Network, which lora wants to democratize. The intention: to build a free alternative in addition to the commercial networks. With a swarm financing, one is currently looking for patrons who receive hardware for donations. The Kickstarter campaign has already exceeded its funding target of €150,000.

First, the networked technology is made possible by a peculiarity of Lora devices: The costs per connected device are vanishingly low compared to other network technologies. For example, a so-called gateway, connected to the Internet in a private apartment, can bring up to 10,000 radios online within a radius of several kilometres. Such a gateway currently costs around 200 Swiss francs, and the trend is falling. Unlike mobile phones, such a small group of volunteers can connect an entire city with little money. “I’m excited about this opportunity,” says Gonzalo Casas, who is working for the Things Network in Zurich. In his spare time, the software developer builds the Internet of Things for Zurich with office colleagues and other interested parties. Two LoRa gateways are already in place, and seven more are expected to be added across the city over the next few months.

The LoRa Alliance, an open, nonprofit organization, drives the standardization of LoRa technology because it can be used safely and economically for many IoT applications. LoRa Alliance certification requires LoRa-certified devices to meet the functional requirements of LoRaWAN protocol specifications, which is confirmed by a successful test against the LoRa Certification Program.

The accredited test laboratories of 7 layers in Ratingen have been one of the first independent 3rd party laboratories in Europe to receive the authorization to carry out tests under the LoRa test and certification program.

But it is not only the SIM cards that need to change, but also the mobile operators. Given the different functioning of the devices, traditional contract models no longer make sense. In the future, it will be essential to make flexible offers to the customer that can be tailored to their requirements. For medium-sized enterprises in particular, the savings could not be negligible thanks to such individual contract offers. Finally, it makes a difference whether sensors should check the condition of a product in a truck loading room in real time or passengers in coaches should stream films in HD format.

Providers have therefore set up their own departments, whose employees deal exclusively with IoT or Industry 4.0 and prepare corresponding offers. But this applies not only in connection with SIM cards, but also with LoRa applications. If the volume of data to be sent is small, they are a good alternative. These LoRa devices send and receive data only at predetermined times, keeping energy consumption low. Ideal for traffic management: Street lighting could be based on traffic, for example, so that lanterns only consume energy when vehicles are actually on the road. Parking spaces can also be better managed: LoRa communication would allow cars to be used in an orderly manner to create a free parking space, which could optimise utilization rates.

In addition to local IoT solutions for WiFi, developers and providers should also be able to use other technologies that are just as essential to M2M connectivity. 2G, 3G and 4G networks are already playing an important role and LoRa devices will soon become more widely used. This will provide a suitable technology for every possible IoT application. In other words, connectivity is what the user makes of it.

MOKOSmart, which has located connected LoRa devices as a future business area and operates test networks in Shenzhen, China, is also one of those interested. Flory heads the sales department M2M (machine to machine) at Shenzhen. He sees Lora technology on the verge of gaining a broad foothold. It is high time for device manufacturers to have the Internet of Things on their screens: “If you don’t deal with it yet, it will be hard to catch up.” The telecommunications service is at the heart of building networks and bringing together key players, from chip manufacturers to software developers and service providers. “We are in a good position to drive forward the development of the infrastructure to more LoRa devices,” says Florry. 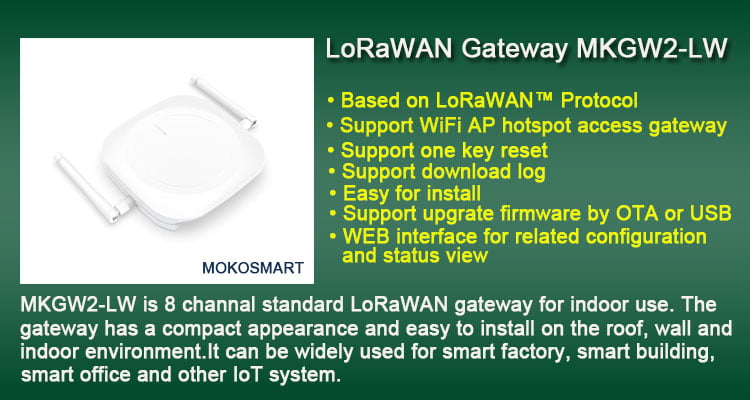 The Gateway MKGW2-LW, which is suitable for LoRaWAN technology, is also suitable for applications with FSK modulation. In addition to the traditional packet forwarder mode, it also has LoRaWAN server functionality (LoRa WAN Class A & C 1.0.2 EU), which eliminates the need for additional setup of a LoRa server. Other features include the small dimensions of 75 x 75 x 25 mm, an external SMA antenna port, Ethernet network connection and the supply of 5 V/0.5 A via micro USB cable.

The LoRaWAN gateway can be used to implement an efficient 8-channel LoRa solution, which can also be configured via a remote JAVA application. Up to 100 LoRa devices can be managed. The MKGW2-LW is also available as an outdoor version.

MOKOSmart, an industry leader in the field of large low power wide area networks (LPWAN), announced today that two more national LoRaWAN networks are planned: in cooperation with  telecommunications and IT provider, the service provider and pioneer in wireless broadband, media and corporate IT infrastructure.

“The networks show that LPWA technology can not only be transformative, but also offers groundbreaking opportunities for the economy that could not otherwise be presented.”

“The upgrade of the existing LoRaWAN™ radio network with new base stations and the subsequent nationwide rollout will be a good deal as we integrate a large part of the LPWAN gateways into existing wireless broadband locations.”

With support, we has started to launch the nationwide LoRaWAN network. Successful tests were carried out, where full coverage will also be achieved as the first phase of the project.