As for LoRaWAN, it is the name for a radio network based on LoRa. LoRa and uses frequency bands from the license-free ISM bands. This means that a LoRaWAN can be an alternative or supplement to the traditional mobile network with a central network operator. What’s more, a LoRaWAN is also referred to as a 0G network to differentiate it from traditional mobile communications.

Note: American LoRaWAN is different from European LoRaWAN. This has an impact on the transmission rate and thus also on energy consumption.

• Range: Depending on the topography, up to 2 km in urban areas and up to 15 km in rural areas. Good penetration of buildings is achieved.

• Energy consumption: Between 10 mA and 100 nA in sleep mode. Depending on the application, the battery life is 2 to 15 years. 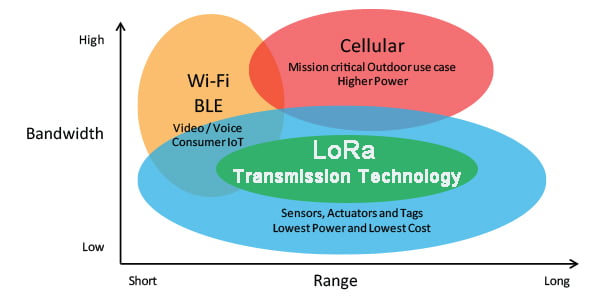 The transmission method is called “Chirp Spread Spectrum”. And the signal transmission takes place as a kind of chirping. Then, the chirped pulse is spread over a wide frequency range. The bandwidth can optionally be used for a high data rate or a robust transmission. The spread factor and the bandwidth determine how high the data rate can be and how high the probability of reception is.

In a LoRaWAN, gateways are the receivers for the radio signals at 868 MHz. Here the LoRa chips receive the chirp signals. As for gateways, on the other hand, connect to the Internet.

However, if you are dependent on a wide-area radio network, you can also contact MOKOSmart, we only operate our own gateway, which speaks to the servers over the Internet. With regard to security, you only have to trust the network server to deliver the received data packets and the application server, which can decrypt the content.

The distance between the transmitter and the receiver is approximately 3 km (city), approx. 6 km (suburbs) and up to 13 km (rural areas) depending on the surroundings and built-up areas.

Communication between the terminal and gateway takes place on different frequency channels with different data rates. The range of data is  0. 3 to 50 kbit/s. The physical package size is 64 bytes. 13 bytes are required for the header. This leaves 51 bytes for the user data.

Note: in the United States, channel time is capped at 400 milliseconds. This means that only a maximum of 11 bytes of user data can be transmitted per packet.

The SF12 (spreading factor) at 125 kHz (bandwidth) only achieves 250 bit / s (data rate). The receiver is very likely to perceive the chirp pulse because it is comparatively easy for it to distinguish the signals from the noise.

The LoRa modulation process enables optimal transmission power with the lowest possible power consumption by the transmitter. The low energy consumption enables battery life of up to 15 years.