Radius networks launched its beacon somewhere in 2014. It is an open-source beacon having a wide range of open markets with a different type of beacon applications.
All three standards use BLE broadcast mechanism to transmit advertising packets on the BLE channel. They use 37, 38 en 39 to avoid conflicting Wi-Fi traffic.

All standards use their own structure of the BLE advertising for adding their data and formats. The beacon device advertises the same packet on all three of the advertising channels every time. Daarom, all BLE packet scanner or receiver can pick that packet easily. Once the receiver receives, it determines that either that packet is decodable or not. If that is decodable, the receiver takes the corresponding action.

• Bovendien, the data type explains whether the data is a name or A URI. It further designates that either it is a service UUID or one of the other defined data types. 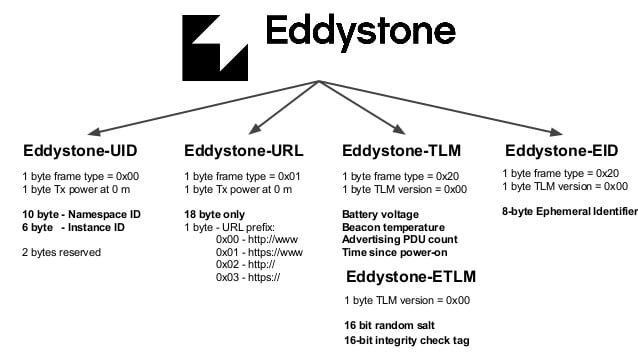 The namespace portion uses for grouping a particular set of beacons. Anderzijds, the instance ID is helpful to identify individual devices in the whole group. Daarnaast, the division of ID into instance components and namespace facilitates to optimize of BLE scanning strategies.

Bijvoorbeeld, if an Eddystone-URL beacon broadcast the URL like goo.gl/moco18, the client can go to the web page by tapping on it.

iBeacon uses a 30-byte packet. Beacons must broadcast this packet on 100 meters intervals. Echter, all beacons do not adhere to this distance restriction. Different iOS apps that use the Core Location framework can ask iOS to continuously monitor for beacon-region-crossing events. It includes existing or entering the proximity of an iBeacon by the UUID. Bovendien, it further includes major and minor fields.

IOS tracking takes place whether the application is running or not. Bovendien, it can turn on the closed app. It is mandatory to turn on location features. Anders, the app will not monitor the location.

Sometimes it appears that Eddystone-URL is not working. The reason is: Google has some ranking or scoring mechanism. It means sometimes Google does not show a URL having a very low click-rate. Bovendien, they also hide notifications or URLs that you have dismissed in the past. Echter, it is difficult to specify the exact reason here. If there is an unseen issue, you can take your issue directly to the Physical Web crew.