LoRa uses the CSS (Chirp Spread Spectrum) modulation which uses a frequency spreading method as a modulation technique. So-called chirp pulses are sent as symbols, which increase or decrease in LoRa frequency continuously over time. The data transmission is then realized by the sequential sequence of these chirp pulses.

Since LoRa works in the ISM frequency bands (433 MHz, 868 MHz and 915 MHz), the radiated transmission power is limited. In order to have a larger radio range than conventional modulation types such as To achieve FSK (Frequency Shift Keying), the receiver sensitivity has been significantly improved with LoRa. The LoRa receiver can still successfully receive and decode a useful LoRa signal up to 20 dB below the noise level, which results in a receiver sensitivity of a maximum of -149 dBm. Compared to the maximum FSK sensitivity of approx. –125 dBm to -130 dBm, LoRa offers a significant improvement. With the FSK receiver, the signal can only be successfully decoded if the useful signal is approx. 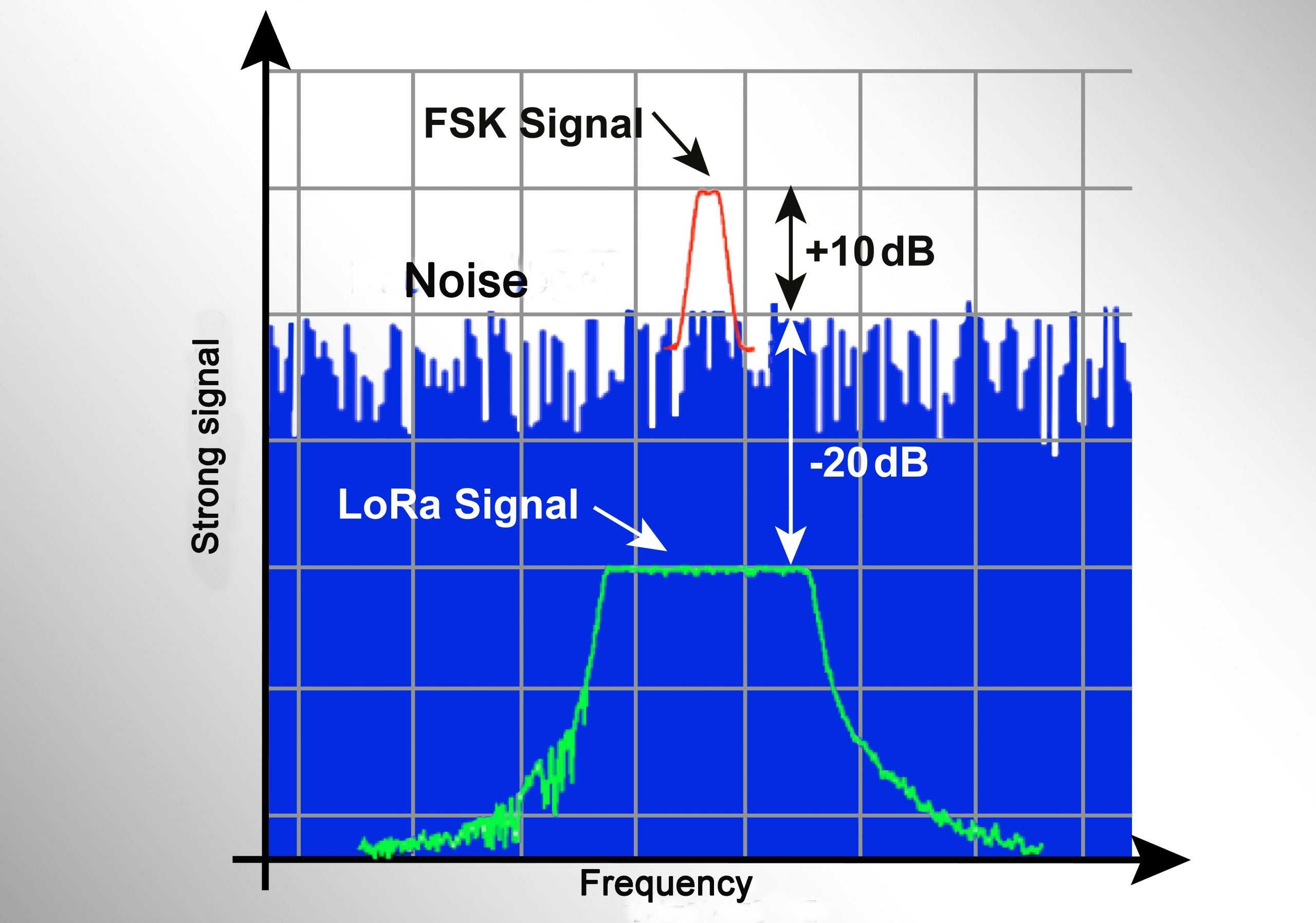 From the graphic above you can see that LoRa can receive about 30 dB weaker signals than with FSK. However, there are two restrictions that somewhat relativize this big difference.

Comparison measurement between LoRa and FSK

To find out how good LoRa really is, a direct comparison between LoRa and FSK should be carried out. For this purpose, our previously used standard FSK transceivers (CC1020 and CC1101) are compared with the data from the LoRa / FSK transceiver SX1261.

According to the information from the datasheets, LoRa achieves at least a 24dB better maximum sensitivity than with the best FSK transceiver (SX1261). Compared to the old FSK transceivers (CC1020 and CC1101), the maximum sensitivity is even 31 or 33 dB better. Since it can be assumed that the radio range can be doubled for every 10 dB more sensitivity, a 4 to 8 times the radio range should be possible with LoRa compared to FSK.

Our own measurements have given the following results:

Another view shows the energy-saving potential of LoRa. In order to achieve the same sensitivity as with FSK, approximately 4 times the data rate can be used with LoRa. The same radio telegram thus becomes 4 times shorter and the energy consumption also drops by a factor of 4.

As with all radio transceivers, the maximum LoRa sensitivity of -149 dBm is only achieved at the lowest data rate. This data rate for LoRa is only approx. 0.02 kbit / s and is therefore unusable for many applications. However, if such low data rates can be used, 4 times the radio range is theoretically possible compared to modern FSK transceivers.

If the LoRa data rate is increased to 1.2 kBit / s to 10 kBit / s, LoRa achieves approx. 4-6 dB more sensitivity compared to modern FSK transceivers. Compared to older FSK transceivers such as the CC1101 or CC1020, the radio range can even be doubled or tripled with LoRa.

There is an interesting energy-saving option in applications where the current FSK sensitivity was sufficient. If the same sensitivity is to be achieved with LoRa, the data rate can be increased by a factor of 4 compared to FSK, whereby the energy consumption can also be reduced by a factor of 4.

For us, LoRa technology represents an interesting alternative for applications with data rates up to 10 kbit / s, since the radio range can be increased massively compared to the older transceivers. Of particular interest to us is the possibility of connecting to the LoRaWAN network, as this means that IoT applications can be connected to the Internet practically anywhere.

With our LoRa module “TRX433-70” we are ready for future innovative LoRa projects.

The meter readings, switching commands and other information can be transmitted from the concentrator module to the router and back in a variety of ways. If the wired transmission is not possible or too expensive, radio transmission with LoRa can be an alternative for remote reading.

LoRa stands for Long Range, i.e. high (radio) range and is an alternative radio standard to the known technologies such as UMTS or LTE. In many countries, LoRa has already established itself as the basis for a communication standard in the so-called Internet of Things (IoT), for machine-to-machine (M2M) communication and for industry and smart city applications.

The LoRa radio standard, like other radio technologies, uses the free LoRa frequency bands from the license-free ISM bands (Industrial, Scientific and Medical). In Europe, these are the bands in the 433 and 868 MHz range. By using a special radio procedure, the so-called frequency spread, the technology is almost immune to interference. The range between transmitter and receiver is between 2 and 15 km, depending on the environment and built-up area. Due to the high sensitivity of -137 dBm, high penetration of buildings can be achieved. The radio signals penetrate deep into the interior of buildings and basements. Especially at campsites where the metallic covers of the caravans and mobile homes often weaken the signal strength of WLAN, radio transmission with LoRa is superior here. The data rate at LoRa is between 0.3 and 50 kbit / s.

LoRa is mainly used in applications in which very little data is to be transmitted over a long distance in a very energy-saving manner. These data are usually measured values, status signals or manipulated values.

WLAN and mobile radio are designed to transmit large amounts of data. Relatively short ranges are accepted. LoRa, on the other hand, is optimized for the transmission of small amounts of data over large distances. The following table shows some differences between the different radio standards.

Low Power WANs (LPWANs) are network concepts for the Internet of Things (IoT) and machine-to-machine communication (M2M). LPWANs are characterized by the fact that they can cover distances of up to 50 km and require very little energy. There are several technical approaches to realizing the LPWANs. One from ETSI: ETSI GS LTN, other names are LoRaWAN, Weightless and RPMA, which stands for Random Phase Multiple Access.

So that the bridgeable distance is not impaired too much by the free space attenuation, some of the LPWAN concepts mentioned use frequencies in ISM bands at 433 MHz and 868 MHz. Few also work in the ISM band at 2.4 GHz.

For example, as regards SigFox as LoRaWAN (Long Range Wide Area Network), it uses the ISM band at 868 MHz (USA 915 MHz) in Europe. The bridgeable distance range is over 5 km in the urban area and over 15 km outside the city. There are also radio transceivers in the LoRa frequency range of 2.4 GHz with which a range of 10 km can be bridged. LoRa transmission is a combination of Chirp Spread Spectrum (CSS) and Software Defined Radio (SDR). A key advantage is that signals that are up to 20 dB below the noise level can still be detected. The LoRaWAN concept supports bidirectional communication, mobility and location-based services.

The end devices are connected to a base station, which in turn receives the information encrypted from a backbone via TCP / IP and the SSL protocol.
To ensure that the battery life of the end components is as long as possible, all data rates and the RF output signals are managed by the LoRaWAN network and the end components are controlled via an adaptive data rate (ADR). There are three-terminal device classes: Class A devices can communicate bidirectionally and have a planned transmission window in the uplink, class B devices also have a planned transmission window in the downlink and the transmission window for class C devices is continuously open. The LoRaWAN technology is standardized by the LoRa Alliance.

LoRaWan is a specification and describes a framework for wireless networks. It is used in networks with little data traffic, for example in sensor networks. LoRaWan (LongRangeWideAreaNetwork) is a so-called LPWAN (Low Power Wide Area Network) protocol. This article shows the frequencies used by LoRaWan and the available classes of end devices.

LoRaWan is also treated like a star topology. Gateways forward messages from the end devices to a specific access server. The gateways are connected via the standard server via standard internet connections.

Between the actual transmission time contacts, Class A devices can put their LoRa module completely in an energy-saving mode. This will change energy efficiency.

Class B, others to class A’s fault windows, become further reception windows. Class B devices are synchronized via cyclically sent beacons. These beacons are used to communicate, and other reception windows are open at other times. The loss is that the latency can be determined in advance, the loss of energy consumption as a component number. However, the energy consumption remains low enough for battery-operated applications.

Class C significantly reduces the latency for the downlink, since the receiving window of the end device is always heard as long as the device itself does not give any messages. For this reason, the trusted server can start a downlink transmission. A time change between class A and C is particularly important in battery-powered legal contracts, for example, “firmware-over-the-air” updates.